Pond algae can be an ongoing problem for a lot of ponds and lakes, particularly as the weather warms up in the spring.  Historically though the only way to deal with the growth was to treat it with a chemical algaecide of some kind, and these, while often effective, can lead to some other problems for the pond down the road.

Ideally, most pond owners want to avoid chemicals, and there is a cost involved, most notably as the waters get bigger...so what's the solution?

It actually works and works well for the vast majority of algae types.  Green water, toxic single cell blooms, string algae, floating mats, can all be reduced or eliminated with a properly sized ultrasound system in a pond.  Over time, the device saves so much money on additives and treatments that it pays for itself in a season or two.

Read on to learn more about our experience with ultrasound technology over the last decade and why we think it's one of the best solutions going for chronic algae problems on large ponds or lakes. 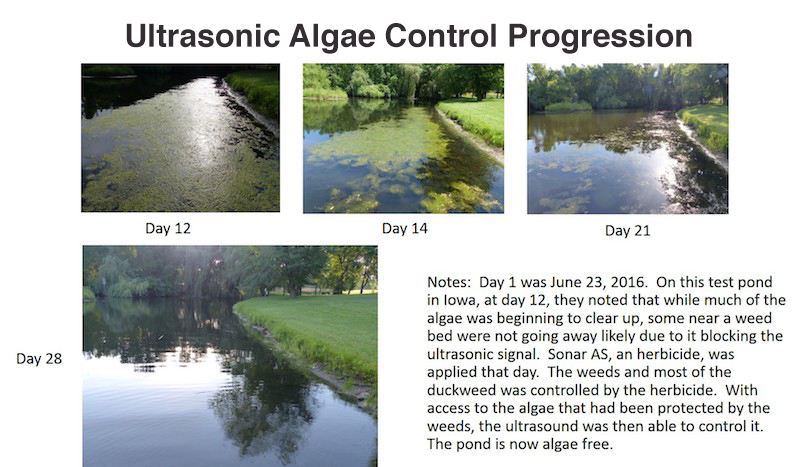 Over the last 14 years or so, we've seen several brands and models of ultrasound systems come onto the market. All of them have worked, to some extent, to help with algae reduction in ponds, waste water operations, and other industrial settings.

We've worked with, or studied most of the top brands and in later years, we began to look at other factors, such as the country of origin, or manufacture, frequency densities, and overall reliability.

We concluded we wanted to work with American made devices. And perhaps more importantly we wanted to insure that if any repairs ever had to be made, they could be done here in the states. In the past, in some instances, owners would have to ship devices to Europe for repairs.

It should go without saying that reliability is very important, and with our original product line, some circuit boards were problematic. So we ended up switching to the first brand of ultrasounds made in the US, which had a more dense frequency range (79 vs 16), and we carried this line for seven years.

For the most part, performance was good with about a 75% success rate, mostly due to the frequency improvements. Reliability was good, but not entirely without a few problems. Most concerning though, was a general stagnation in developing out the technology, in any appreciable way. Other than some minor modifications to limit breakdowns (which is still a good thing), there was no significant work to improve the performance on algae species.

But everything is changing in 2022! 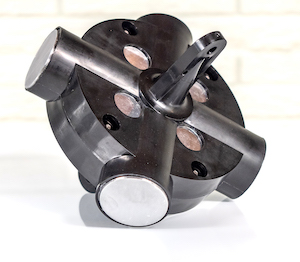 This is the Pulsar Ultrasonic Algae Control System. In our review, it's, by far, the most advanced ultrasonic algae control device currently available for the algae management in ponds and lakes.

Here's a few of the specs which stand out...

Green Algae and Diatom Algae Control Range: 150 meters radially from the device or about 17.5 acres.

Blue-green Algae with gas vesicles Control Range: 400 meters radially from the device or about 124 acres.

Here's a few things to note.

Remember, we made the switch some years ago when the frequency density improved from 16 to 79, which was monumental at the time. Why? Because the closer you can match the resonant frequency of the algae cell, the more vibration you'll create in it, and the more damage you'll do. Often, close, is good enough for reasonable control. But to maximize the control and performance you need to match those resonant frequencies.

And with the Pulsar, we see an increase in frequency density from 79 to a massive 2024 per cycle using dual bandwidth ranges!

The effective control range has also been increased substantially over any existing ultrasound system due to the 360 degree coverage of the Pulsar.

Historically there would be a handful of models and sizes to fit various ponds. That's now been reduced to just two distinct units. The Pulsar 4000 is the larger of the two new systems being introduced. For smaller ponds, the Pulsar 3000 will cover ponds up to about 2 to 3 acres in size.

Both systems now use variable length power cables, much like you would see used on a pond fountain. As well, an all new solar package is available that works great in really large ponds and lakes.

All in all, we expect to see better control of a wider array of algae types, improved performance and range, and lower costs to the pond owner by making the switch.

When anyone is considering ultrasound treatment for their pond or lake, we suggest doing a preliminary algae sampling test to see what specific species are present in the water body.  After doing so we can make suggestions on whether ultrasound would be a good fit for the situation or you might be best served going with an alternative treatment method.

Please contact us if you have questions on ultrasonic algae control, or if you are interested in the algae testing.